PETER AND THE STARCATCHER

Theatre, when done right, is a place of magic. For as long as people have been around, one of the things we the people do- in every part of the globe- is gather together in large groups, sometimes around fires, sometimes in large darkened rooms, sometimes in grand palaces of art, and listen to storytellers who through the power of imagination somehow take us far, far away and show us tales of adventure and joy and sorrow and wonder. It is both simple and vastly complex, this thing we do. And when it is done right, the stories we are told remind us what it means to be a human being; how scary and tragic and fun and sublime it is to exist. One of the places I love the most for these theatrical journeys of the soul is the Theatre at the Fine Arts Center in Colorado Springs, and this past week-end they yet again took my on a fantastic voyage that was thrilling, heart warming, and invigorating. They did this with a show called Peter and the Starcatcher, the best show on the boards  that I've seen in quite awhile.

The show, based on the book of the same name, tells the origin story of Peter Pan, Captain Hook, and most of the denizens of Neverland familiar to those who know and love the original Peter Pan. But while a prequel of sorts, this is a story that stands up on its own, and can be enjoyed by those who never heard of the boy who could fly. And it is a great story, set in Victorian times but told with a modern sensibility- brilliantly staged, expertly played, and magically realized. For more on the story itself, go HERE. 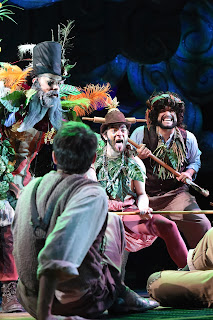 As brilliantly staged by Joye Cook-Levy, the show is the perfect example of how exciting, creative, and delicious theatre can/should be. The script demands, and Cook-Levy more than delivers, a director with intense creativity- where scenes shift rapidly with no time for such things as conventional scenery. It's a lot like Shakespeare in that we, the audience, are asked to use our imaginary forces. To do that- to get an audience to suspend its collective disbelief and take the required leap of faith, a director must have the cast instantly establish trust with everyone in the room- cast and spectators. This is done right at the top of the show: the lights come up, and what seems like a mob of men walk downstage and talk to the audience, and then- as if by magic, Rebecca Myers- the sole female in the cast- emerges from the surrounding throng of men. It's a simple, but clever moment that works very well. From that point on, I was ready for the cast to take me wherever they wanted, my disbelief happily suspended. And by the time the ensemble turned itself into a Dodo bird, my disbelief was not suspended, but banished completely.

The show is a quasi-musical, and the numbers are staged by another one of the many geniuses they have at the FAC, Nat Halvorson- who does yet another outstanding job. One of the many highlights in the show is a sort of English music hall number performed by mermaids that had me in stitches.

The cast is, to a person, excellent. Every performer is energetic, engaging, and inspired. Not only are 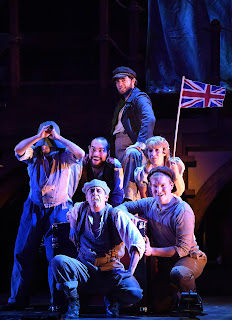 they each talented individuals, they also work insanely well together, like a well oiled machine- a theatrical Rube-Goldberg machine of some sort. They each play several characters, and give each role clarity and specificity so that there is never a question as to which actor is playing what role Along with the excellent Ms. Meyers, they are: Jonathan Andujar, Adam Blancas, Karl Brevik, Sammy Gleason, Omid Dedstan Harrison, David Hastings, Michael Lee, Jordan Leigh, Levi Penley, Kevin Pierce, and Andrew Wilkes. Kudos to each and every one of them. As Lord Aster, Karl Brevik is wonderful; as both Mrs. Bumbrake and the mermain known as Teacher, Adam Blancas is hilarious; and the boy who will become Peter Pan, \Levi Penley soars; and as Black Stache, Jordan Leigh yet again turns in a bravura performance. Leigh is a freak, a chameleon who can play pretty much anything he wants on stage. Unreal.

The technical aspects are perfection, of course. This is standard with shows at the FAC. The set, by Christopher l. Sheley, is gorgeous- setting tone, adding to the story, and evocative of another time. Perfectly complimenting the set are lights by Jonathan Spencer, and a sumptuous wardrobe designed by Janson Fangio. The music in the show is provided by conductor/keyboardist Jerry McCauley, and supported with percussion by Josh Birkhimer. These two are magicians in their own right, creating worlds within worlds with their instruments.

So, if you haven't figured it out yet, I love this show. It is what theatre should be, full of joy and wonder and Star Stuff. If you have any way to do so, get yourself to Colorado Springs and catch this shining star.

Might I suggest you include the run dates and how to purchase tickets? Thanks!

HATERS GOTTA GET OVER WHATEVER IT IS THAT MAKES THEM HATE

I am thinking of anger and resentment today. How it can warp our perspective, drive us mad, create monsters in the gardens. It is a strange,... 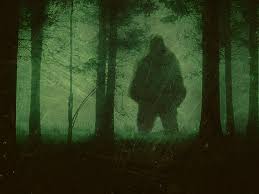