YOU CAN'T STOP THE BEAT

I love theatre. Have I mentioned that? Well, I do. I friggin' adore it. Especially when done by seemingly like-minded lunatics who somehow manage to capture a little bit of the effervescent magic of what it means to be a human being; who reach out into the soul of the audience and say "it's okay, we get it, now let's sing and dance a little"; who kick it in the ass.

That's what's going on down at the Colorado Fine Arts Center with their current production of Hairspray. This is a  funny, smart, and sexy show that starts with a bang and keeps getting better, scene by scene and number by number. Hairspray (based on the 1988 film by John Waters) follows the adventures of Tracy Turnblad in 1962 Baltimore. Tracy is a teen-ager who loves to dance more than anything in the world, and dreams of being a regular on The Corny Collins Show, a local TV show where teens dance and sing to the latest tunes. Corny Collins is Baltimore's version of Dick Clark, and Max Ferguson is hilarious in the role. The show is produced by Velma Von Tussle, local villaness and former Miss Baltimore Crabs- played with nasty gusto by Alannah Moore. The show within the show epitomizes rock-n-roll in the early sixties- white bred and watered down. Even so, Tracy loves it- and especially local teen star Link Larkin. Link, as played by Marco Robinson, is hilarious- a kind of bumbling young leading man who reminded me of James Franco- if Franco could sing and dance. Link's girlfriend, another member of the Corny Collins Show, is mean girl Amber Van Tussle- daughter of Velma. As Amber, Lacey Connell gives us a great meanie who is both entrancing in looks and style, but appalling in manner and heart.

Tracy's sweet, determined, and a little bigger than the average dancer- but that doesn't slow her down for a minute.  The show lets us know right away that we're in a world that's a little larger than life- but at the same time a little more realistic than your average musical- with the song "Good Morning Baltimore". In it, we meet Tracy, who loves her town, and life itself, unconditionally. In her world, there are flashers, bums and rats, as well as sunshine, magic, and promise. Andrea Rutherford plays Tracy perfectly- she's perky, kind, silly and sexy. The moment the lights come up on her, you love her and want her to win the day. Tracy is a working class girl, and her parents are you average working class folks, with dreams that didn't quite come true. But they are also unique in their optimism and love, which is so sweet and strong you just want to hug them. The mother, Edna, is played with perfect comic timing and gigantic heart by Drew Frady. Edna is a force of nature who has never let herself shine in all her glory at the top of the play- but thanks to her daughters love and the circumstances of the story, by the end of the show Edna is a show-stopping Diva who owns the stage. Michael Augenstein plays Tracy's dad Wilbur, a goofy guy who owns a novelty shop and who encourages his daughter to do what she wants and follow her dreams. Wilbur is charming in the role. One of the many things I love about this show is how these parents, who could be seen as geeky losers, are loving, strong, wonderful people. They don't have a lot of money, or a strong sense of fashion, or any of those shallow things we seem to prize too much- but they have souls the size of the cosmos. And their song You're Timeless to Me is fantastic- one of several show stopping numbers. Tracy and her best friend, Penny Pennington- played by the magnetically charming Carmen Vreeman- watch the Corny Collins show religiously- much to the consternation of their parents, who would like them to spend more time studying. Tracy, in particular, seems to get into trouble a lot at school- and ends up in detention most days. This is actually a good thing, because it is there that she meets Seaweed J. Stubbs and his friends- the black kids in this still segregated time. Seaweed, as played by Tyrell D. Rae, is one cool dude- who can dance and sing and has that kind of ease with himself that makes you want to hang out with him. Tracy and Seaweed hit it off instantly, and before you know it, Seaweed is teaching Tracy all the lastest moves. A spot on the Corny Collins Show opens up when one of the teen dancers gets knocked up, and Tracy's chance to shine finally arrives. What follows is a battle of wills between Tracy- optimistic and accepting- and Amber- snooty and mean. And then there is the eleven o'clock number I Know Where I've Been, sung by Seaweed's mom, Motormouth Maybelle- that brings down the house. Motormouth is played by Lynne Hastings- yet another stand out in this stand out cast.

The show is directed by Scott RC Levy- who became the Artistic Director of the Fine Arts Center this year and has consistently provided vital shows that speak to the heart and mind in equal measure with passion. Here again, he shows off his talent. The show runs at  a perfect pace, never dragging, always engaging, and consistent in mood and energy. He sets the tone from start to finish as one just this side of reality- fantastic, funny, and quirky.

I really can't say enough how much I enjoyed this show. It's life affirming. I hope it sells out the run and extends for a month or two, so that I can see it again.

So, that's what I think of Hairspray. Other than that, don't forget to check out my plays, available at Indie Theatre Now. Also, there's a chance my play Burning the Old Man will be done in Brazil this fall. That would be the fourth continent I've been produced on- which I think is cool. And very soon, my short Strong Tea will be ready for the world. Until then, go out and get your theatre on.
at May 21, 2012 No comments:

For the past few months, I've been working on Our Town by Thornton Wilder. You know, that play that every high school does at some time or other, the one with the scene in the soda shop that every young actor or actress has to do in acting class at some point. The one without any scenery. A lot of people think the play is sentimental, or boring, or too old. But then again, a lot of people are morons. This is a funny, dark, sharp edged play that goes for the jugular. It is funky, groovy, and whatever other adjective you'd like to use to mean fantastic.  I think the only possible way you can not find it to be a brilliant, exciting play is to not have seen or read it, and judge the book by it's cover. 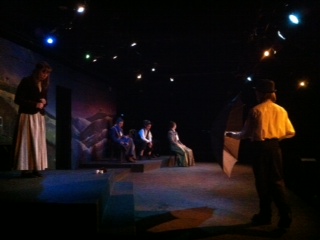 Until now, my favorite version of this play was the one that was shown on PBS in the eighties, starring Spalding Gray as the Stage Manager, Eric Stoltz as George, and Penelope Ann Miller as Emily. It was really funny, and sad, and magic. I remember watching it with my mom, long ago and far away in the land of my youth. Mom cried and cried at the end, when Emily bade farewell the world. I, being young and immortal, made fun of Mom for being such a cry-baby. I was fifteen, and such things were part and parcel of my existence back then. Even so, I loved the production- it was dark, and intelligent, and passionate- and made me a life-long fan of the play. 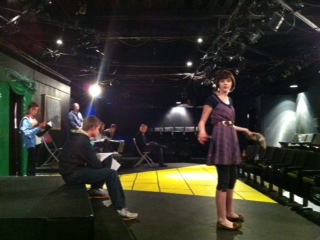 Not surprisingly, when I wrote the screenplay for Ghostlight, a paranormal thriller about a high school theatrical production that gets haunted by angry spirits, I chose Our Town to be the play-within-the-movie. Hopefully, you will all get a chance to see that little opus on a screen near you in the near future. (that all depends on how Strong Tea gets received when it makes the film festival rounds this coming year. And if you are curious about stuff I wrote, go HERE) 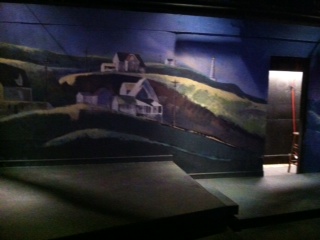 So, when Steve Wilson, Artistic Director of the Wolf Theatre Academy at the JCC in Denver asked me what show I wanted to direct for the spring slot, it seemed like the time had come to direct my own version of the show. 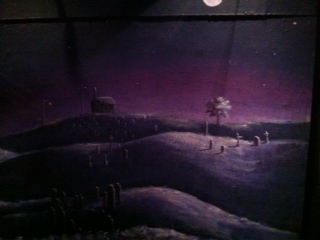 And it has been fantastic. First off, I have the greatest cast a director could ask for- smart, funny, and willing to do whatever it takes to kick it in the ass. We tweaked some of the Stage Manager monologues, dividing them up between the whole cast at some points, and between the Stage Manager and three Assistant Stage Managers (characters we created just for this production) in others. Instead of having recorded sound effects, we are using live gadgets, like they did on old radio shows- which is really fun. We also went with a back drop- against tradition with this show, but really sweet. I told my scenic artist to make a backdrop that looked like an Edward Hopper painting, and he came through in spades. clubs, hearts and diamonds.

So here's the thing. If you are anywhere near Denver between now and Sunday night, get your self to the JCC to see something special, unique, and magic. I promise, you will thank me. 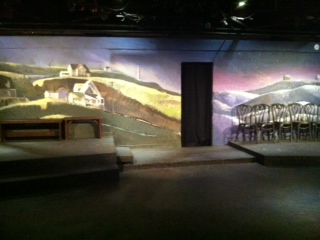