NARNIAN DWARVES FREAK ME OUT

When I was in elementary- long ago and far away in a kingdom by the sea- I read The Chronicles of Narnia by C.S. Lewis. They were a great set of books- fun, exciting, full of unexpected creatures, spooky bad guys, and all those sorts of things. I think I must have been in fourth grade when I read them. They fall, in my memory's time line- which is admittedly questionable- between reading the Oz books by L. Frank Baum and The Hobbit and The Lord of the Rings by J.R.R. Tolkein. (on a side note, I always thought it rather presumptuous of old J.R.R. to have 3 initials before his last name)

Anyway, in The Last Battle, which is the last book of the Narnia series, there's this scene that freaked me out when I first read it, and still gives me the creeps now. Towards the end of the story, all the heroes are holed up in this cabin. The heroes are humans and magic creatures, including a group of dwarves who are sitting in a circle with their eyes closed, terrified and not in a very good mood. Outside, the forces of evil are closing in for the kill. All looks hopeless, but at the last minute Aslan, the lion appears and magically saves the day, transporting everyone to this really nice, safe place. Hooray. But then, the heroes notice that the dwarves are still sitting in a circle with their eyes closed, terrified. See, in their minds, they're still sitting in the cabin, which has been set on fire, and they are about to die horrible awful deaths. And nothing anyone says can convince them otherwise. One of the heroes even picks up one of the dwarves, pleading with him to open his eyes and realize that all is well. But to no avail.

Eventually, they leave the dwarves behind.

That little bit haunts me to this very day. The idea of people who are so sad, so sure that everything is terrible that they can't accept anything other than misery was all too plausible. I mean, yeah, there are lots of terrible things out there, and yes, we all are doomed to one day shuffle off this mortal coil, and the sun will one day explode, and the economy sucks- I get all that. Which to me seems like an even great incentive to try and see the light where ever we can, to hear music when it plays, soak up smiles when they come our way.

That's about all for now. And if you haven't done so, please check out my plays at INDIE THEATER NOW and PLAYSCRIPTS, INC. You can download one for just $1.29. See, things are getting better already.
at June 23, 2012 No comments: 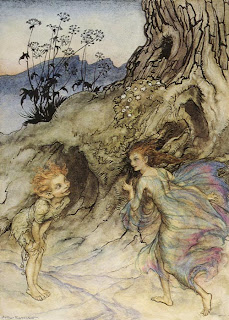 So, awhile back, I entered a contest via Twitter. I know, it sounds kind of goofy, but I figured why not? It was called Pitch-n-Play, and was being put on by Playscripts, inc. - a group that has the good taste to publish Hela and Troy, a one act of mine. The concept was simple- write a pitch for a play based on the quote "the course of true love never did run smooth". The pitch had to fit into one tweet. That was it. I wrote about ten pitches, and tweeted them all with the appropriate hash tag. Or is it hashtag? Syntax in this electronic age is liquid, shifting between parallel universes at the speed of light. Anyway, back in early March it was announced that one of my pitches, from the thousands entered, had been chosen as one of three winners. Hooray. Here's the winning pitch in its entirety: The real Puck messes with hearts of teens during high school prod of A Midsummer Nights Dream.


That was part one of the contest. Next, people from all over the world were invited to write a short play based on any of the three winning pitches. Which meant people I had never met were going to write plays based on my idea. Which I found cool. It is thrilling to think of strangers reading my stuff. Well, thrilling and weird, and maybe a little scary. But mostly thrilling. Anyway, in about a month, in between all the classes I teach and shows was directing, I managed to write a play based on my pitch. I decided to have Puck come upon the fairy Peaseblossom, who has forsaken being a fairy because she's fallen in love with a young actor. Puck decides to help her, and hilarity ensues. There's lots of mistakes, parallels to the real Midsummer Night's Dream, and plenty of jokes aimed at the theatre itself. And a baby pygmy hippo.


Here's a small sample, where Peaseblossom, now going by the name Peabo, tries to explain everything to Maggie, a normal high school student.

MAGGIE
Uh, what are you talking about?


PEABO
Isn’t it obvious? Robyn here has been possessed by the real Puck. Puck, feeling sorry for me because I used to be a fairy but fell in love with Tim and became mortal, has taken the magic flower called love-in-idleness and tried to use it to make Tim love me back, but messed things up in classic Puck-like fashion!


MAGGIE
And you’re saying fairies, like the ones in A Midsummer Night’s Dream, are real?


PEABO
Hello! What, did you think Shakespeare made all that up?

You get the idea. So, I wrote it, sent it in, and then today I got notice that my play was one of three finalists, and while it didn't win the grand prize, the decided to publish it anyway, just 'cause they liked it so much. Like I said, Playscripts is known for their excellent literary taste.

So, when it becomes available, I'll post information here. In the meantime, you can get info and/or buy my others plays at both Playscripts, Inc. and Indie Theatre Now.

Now go out there and GET YOUR THEATRE ON.

So I'm waiting on things. Contests, projects, the proverbial ship to come in and all that. And while I do, the wheels of the world keep turning at great speed, as if all motion is perpetual, all moments continual, all threads connected somehow, in a way that I always understand in my dreams but can't quite remember when I wake up. 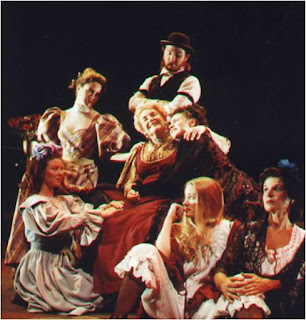 Guess Lennon was right- Life is what happens while you're making plans.

I got a reading of Riddle Lost coming up out in Salinas, California at the Western Stage- one of the many incubators of my artistic soul. I spent many summers there as an actor, working on some pretty amazing projects, including a nine hour, three part adaptation of East of Eden which was one of the seminal experiences of my life. It's run by Jon Selover, who I went to college and who taught me a lot about theatre. 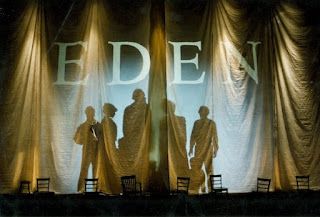 The reading is part of 2x4 Bash, a project run by another old friend and fellow lunatic Mark Englehorn that also includes a reading of the play 8 by Dustin Lance Black- the guy who won the Oscar for writing Milk, and who was in a production of Peter Pan with me at Western Stage. So that's pretty friggin' sweet.

Riddle Lost is about a real life guy from the Old West named Jeff Riddle who's mother was a Modoc Indian and father was a settler and who lived through a really nasty war. It takes place in the after-life, and has a cast of characters that includes Norse death god Hel, a cigar store Indian named Ziggy, and Raven- the trickster god of the Pacific-Northwest. It's weird and funny and sad and I like to think kicks it in the ass. If you're near on Salinas on August 24, go check it out. I'm also doing a lot of children's theatre this summer. A lot. Tomorrow I audition 52 kids for a musical I'm directing up in Boulder in July, and on Monday I start a production of Lightning Thief here in Denver. And while it may be tiring as all hell, it's also really invigorating to do theatre with young folks. They still understand the power of the imagination, and there isn't much they can't do. 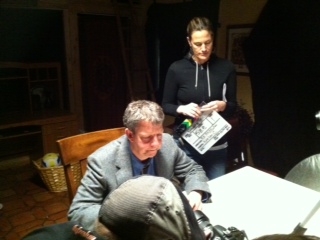 On top of that, I am super close to finishing my first flick, Strong Tea. Like probably a week. Then I leap into the land of submitting to film festivals- where I will live for the next year.

And on top of all that, I have two other screenplays I'm figuring out.

I think I need to take the wife and drive up to the mountains and watch a river splash along for a few hours, sing to the trees, and search for Bigfoot.