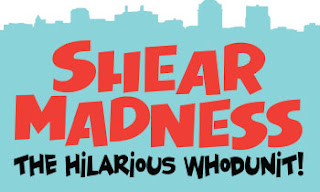 Scott RC Levy and the Colorado Springs Fine Arts Center's Theatre Company have done it yet again- created a unique and exciting night of theatre that is both thoroughly engaging and completely entertaining. This is no surprise. They are by far the most consistently excellent theatre company in Colorado. Their latest gem is the interactive show Shear Madness, which has the distinction of being the longest running non-musical show in America.

It's easy to see why when sitting in the audience at the FAC. The play starts with a hilarious bit of physical comedy, segues into a clever farce, and then transforms into an interactive mystery with the audience helping to solve a murder. I don't want to say too much about the plot, as that will spoil it for you when you go to see it. (and you will go see it!) Suffice to say that the show takes place in a beauty shop, a murder takes place, and a detective shows up to solve the crime. The beauty shop is run by Tony, played with abundant aplomb by the irrepressible Nathan Halvorson, who turns in a virtuoso performance. From the moment the show begins, Halvorson owns the stage, the audience, and the greater Colorado Springs area. Keeping time with Halvorson, and equally amazing, is Rebecca Myers as Tony's co-worker Barbara. Myers is full of sass and sensuality- if not so much smarts. The two banter and gossip to music from the radio, and instantly win over the crowd as they throw local-themed jokes at each other while cutting folks hair. Into the salon walks Eddie Lawrence, play with just the right touch of menace by Michael Lee to make us think he is most likely the killer. After him comes Birgitta DePree as Mrs. Shubert- a snooty buy loveable dame of high society. DePree is brilliant- a force of nature unto herself. There is a lot of interaction with the audience in this show, and the night I saw it she had some moments going back and forth with the crowd that made me laugh so hard my face hurt. When the murder takes place, the police of course arrive, and the show, which is already hilarious to the point where you can barely hear over the raucous laughter of the audience, kicks into high gear as the gruff detective (a fantastic C. Clayton Blackwell) and his rather dim-witted but good natured side-kick (the hilarious Nathan Ferrick) begin questioning both the people in the salon and the audience about the events of the day.

The show is full of lines written specifically for the area, and a there is a lot of improvisation in the play as the story in part moves forward based on what the audience says to the police. As such, there is an immediacy to the play, a sense that this is a once in a lifetime performance, which of course it is. Mr. Levy has skillfully directed the play at a lightning pace, allowing the actors to strut their stuff where appropriate, but also keeping the pace tight so that there are no dull moments.

The design is, as always at the FAC, outstanding. Christopher L. Sheley has created a beautiful set that is lit gorgeously by light designer Holly Anne Rawls. The cast is costumed perfectly by Janson Fangio- with outfits that are comedic, and so very right for each character's personality.

The show is a quick two hours, and I promise you will laugh your ass off if you are wise enough, and lucky enough, to get a ticket to the remaining shows. (for ticket info, click HERE)

I am not kidding. Go see this play.