Showing posts from December, 2015
Show all

MUST BE BEAUTIFUL IN VERMONT THIS TIME OF YEAR... 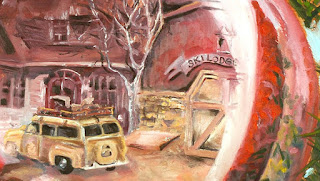 For many years, one of my holiday traditions was to watch the film White Christmas with my best friend Legume (also known as Brian, Honkey, the Judge, etc.). I've probably seen that film at least 50 times, because often I watch more than once per season. I can quote most of the lines- including the jazzy lingo supposedly improvised by Bing Crosby- and sing most of the songs. Not well, mind you- but so what? I love the movie, and it is inscribed in my brain. As such, I have avoided going to see any stage productions of Irving Berlin's White Christmas, mainly out of fear of comparing it in my head to the film and being sorely disappointed.

Happily, I decided to forgo that self-imposed rule and go see White Christmas at the Fine Arts Center in Colorado Springs. This decision was based largely on their impressive track record of exciting and pertinent theatre. I have never seen a bad show there. Ever. I am very glad to report that the FAC has done it yet again with a heart-warming,…
1 comment
Read more
More posts