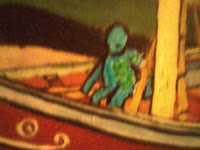 There's a great scene in Annie Hall where Woody Allen likens a relationship to a shark- if it doesn't keep moving, it dies. I think the same is true of our souls. We must keep moving, growing, trying new things- or we slump over and die, and join the living dead. Fortunately, this zombie-fication is not permanent, and there are many quasi- voo doo rituals that can restore us. A trip to India, planting flowers, learning a new language. The list is infinite and groovy and unique to each of us.

I ponder all this because of my buddy Jack, who is painting again, after many years. Hooray. He's even presenting some of his art to the public. Double Hooray. It's been something like fifteen years since he last delved into the waters, and I am vicariously thrilled.

Jack was my room mate many moons ago in the magic land of Salinas. Salinas? Si, Salinas. We lived the Bohemian life with our fellow room mate Greg- and we were always short on money but never short on inspiration. We would have parties- well, we kind approached life as a continual party. At any given time, you could find someone writing a poem, painting, making up an interpretive dance to Gershwin or Jane's Addiction.

On top of that, we were working on a three part, nine hour adaptation of Steinbeck's East of Eden at the Western Stage, which was one of the most amazing theatrical experiences of my life, so far. They were salad days in the salad bowl of the world, and we were all Caesars and Cleopatras. To put it simply, life was groovy.

So, life went on, we went on, and presto change-o, fifteen years go by and we're elsewhere, doing other things. And that's cool- but at the same time, it's become much easier to forget that life is for the living, that one must howl at the moon now and then, that the chimes of midnight demand to be heard. Somehow, we spend more time worrying and less time celebrating. And that's no good.

So Jack, who like all of us has had his share of ups and downs, of remembering and forgetting, has found his way back to creating something that expresses the mystery of existence.

And that gives me hope. It inspires me. It reminds me that we are all of us artists, that we all must keep our souls on the move, or close our eyes and stumble along towards oblivion.

Click on this: Jack : to see more on the show Jack is showing his stuff at. 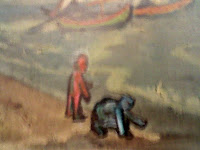 And here is a poem I wrote in Bohemia:

Kelly! That was so lovely to see Jack through your eyes. I love that you can speak out of such a long time friendship. Jack's lucky! So are you.

dude jack's work is amazing. wish you were here to see it. great poem.