WHY NOT MAKE HIS HEAD EXPLODE? 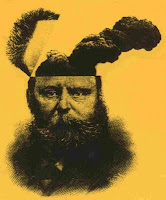 SOME UNFORTUNATE HOUR, now available at INDIE THEATER NOW, and how it came to be.

I was stuck.  I had a big chunk of a new play written, and had hit a brick wall.  The opening was great, characters all clear in my mind, dialogue crisp and clean and all that jazz- but there was something wrong.  I couldn't quite find out what it was, or why whenever I sat down to write nothing really happened- I mean nothing.   I'd sit and stare at the screen and it all seemed weary, stale, flat and unprofitable.  Up to this point, my plays had come fast and furious, born fully formed like Venus on the shell- but not this one.

The play itself was a simple premise- one scene, written in the style known as "realism", following a guy named Tom's slow realization that he's an asshole.  It began as a whim, but now had a life of its' own- and there was no way in Hell I wasn't going to finish it.   So I did what any brave person would do.

I was living in New York City, but my mom still lived in the house I grew up in out in San Jose, California.  I hadn't been home to visit for awhile, and so off I went, into the wild blue yonder.   I visited old friends, went to say hello to the Pacific, and hoped my subconscious would work things out as far as the play was concerned.  And then I got a phone call from a friend.  Thank God,

The friend was Harry Newman.  He's a fellow playwright, and was running The Pool at the time, and was one of those people whose opinion I trusted- and still trust to this day.  He had read the play, and had a  simple question- why does it have to stay in the land of realism?  Why not have his head explode, so to speak?

And like that, it all fell into place.  Yeah, why not have his head explode?  Why not have him slip back and forth between reality and his imagination?  I mean, Old Tom is drunk and getting drunker, and his mental state is not what you'd call stable- why not have his world be askew, ruled by unseen spirits, and all that good stuff?

For me, there are times when I'm writing when all of a sudden, I see the piece as a whole- the world it inhabits, the characters, the color and sound and even the smell of it.  The Eureka moment, if you will.  I don't know why, but I do.  And usually, it happens after working on it for awhile.  I'll be plodding along from point A to point B to point C, with a rough idea of what's supposed to happen and who the hero is and all that, and then someone says something, or I hear a song on the radio, or I see a sunset, or a couple fighting in a store- and BLAMMO, the play is there, and from that point on I usually can't type fast enough.

I dig that part of the process the most.

So I dive back into the play.  Tom is still in the bar, but now and then, the lights change, a spotlight shines on him, and he goes into these strange soliloquies about She Who Shall Remain Nameless, or what the settlers meant when they said they "saw the Elephant", or how he's like a baseball that's been hit by Bugs Bunny and has traveled all over the world.  It fit- all of it.  Time to enter the show in the New York International Fringe Festival and hope it gets in.  And if it doesn't, put it up somewhere anyway. Then I had one more idea.  What if I had a score written for the show, like how Simon and Garfunkel did the music for The Graduate?   I mean, Aristotle did list music as one of the basic elements of theatre, didn't he?  On top of that, I had a friend, Robbie Gil, who knew my work, liked this particular play, and writes really groovy music- in fact, if you don't know his stuff, you need to go to his web site, download some tunes, and get with the program.  I ask Robbie is he'd be OK with that, he says yes, and we are off to the races.

I name the play "SOME UNFORTUNATE HOUR", which in my mind is a variation on the old Rogers and Hammerstein song "Some Enchanted Evening", but no one ever picks up on that but me.  It gets accepted into the Fringe.  I finish the play- which includes a really great monologue by Janus about unrequited love that, if you are an actress looking for a good audition piece, I highly recommend.  I get Tim Errickson, Artistic Director of the Boomerang Theatre Company, to direct- cast Dan O'Neill as Tom, Jodi Dick as Janus, and Ashley Wren Collins as Charity, and off we go.  The show is received well- go here for a review- and then gets a run in Denver - go here for really nice review from Variety.  And now, as part of the Fringe Collection offered on Indie Theatre Now, it's available online for less than $2.  Life is sweet.

Anyhow, that's the very basic story of Some Unfortunate Hour.  Stay tuned for more on me and my shows- up next, my biggest hit yet, BURNING THE OLD MAN.