I HAVE MANY GODS, AND THEY'RE ALL A LITTLE CRAZY

I'm a quasi-pagan, magical thinking believer in Bigfoot, UFOs, and the Loch Ness Monster. Whenever I do a show, on opening night I go backstage, find a quiet corner, and say a prayer to Thespis. I've seen ghosts. At times, like Ghandi, I am a Muslim, and Christian, and a Jew. And a Hindu, and an atheist, and an agnostic. My pantheon includes Superman, Batman, and the Avengers- along with Loki, Raven, and Cassiopeia, Queen of Elsewhere. And I don't see this as in any way illogical.

I am pondering my own gods because I came upon a book the other day that I hadn't read since I was in fourth grade and took part in M.G.M. at Strawberry Park Elementary. M.G.M. stood for Mentally Gifted Minors, although most of the kids at school said it stood for Mentally Goofed-up Morons. There were students from several different schools in M.G.M., broken into several groups of about 20 each. Each group would have class once a week for a whole day. My group met on Wednesdays. In M.G.M., we read books, went of field trips to museums and the beach on a minus tide, did scientific observations of all these animals we had in class, like our boa constrictor Harvey. We discussed Picasso and Edgar Allen Poe. To me, it seemed like a full day of free time- and I couldn't quite believe the powers that be knew what we really did, because how could school be so fun? We didn't even have desks. We had bean bag chairs, and a couple of sofas, and even an old row boat with cushions in it, perfect for reading. The classroom was full of prints of art work, games to play designed to flex your brain muscles, and stacks upon stacks of books. In one of those stacks, I came across a book on Norse mythology that looked pretty cool. I don't think I even noticed the title ( D'Aulaires' Norse Gods and Giants). I just found the cover illustration to be really interesting. I knew of Thor, the Norse thunder god, thanks to Marvel Comics, and decided to give the book a look. I sat down in the row boat, and was pretty much instantly transported to another world, full of gods and trolls and magic. I could not put that book down.  The stories were funny and exciting and a little scary. Thor was not blonde like he was in the comic book, but red-haired, and a little cranky. He was also not quite so smart. Whenever he needed someone with brains, he went to Loki- who was at times funny, always crafty, and ultimately deadly. Loki and all the other fantastic characters in this amazing book were believable to me- powerful but flawed. And they stuck with me. I remember reading about Odin, the one-eyed ruler of the Norse Gods, or Aesir. He had an eight-legged horse named Sleipner, a spear that never missed its' target, and two ravens named Thought and Memory who flew out into the world every day and came back at night to tell him what was going on down on Earth, or Mid-gard. Every time I saw a pair of Ravens in a tree or in a field, I'd think "there goes Thought and Memory". Sometimes I'd wave to them, hoping they'd give my regards to Odin.

Now, most of the characters in these stories were a little on the crazy side of things. Which was perfect, to me- as I had already begun to suspect that most of the world was inhabited by crazy folks. This was 1976- and the world was a strange place. America was Watergate, Richard Nixon, and Viet Nam. The Beatles had broken up, disco reigned supreme, and worse still, the Brady Bunch had been cancelled. The 1960's were a golden age that had passed away with Janis and Jimi and Jim, and according to Pete we were all wasted with Baba O'Reilly. It seemed like every movie had a sad ending, or one where the good guys turned out to be kind of bad, or the bad guys turned out to be not so evil.  On top of that, at home my brother, sister, and I were beginning to understand what it meant to live in a house with an alcoholic thanks to our step-father. Our real dad had left years earlier- and we never really heard from him at all. No phone calls, letters, post-cards, birthday cards, Christmas presents. Nothing. Daddy Jay, as we called our biological father, was a lost hero banished from our lives. I didn't bear any malice towards him- but I did think it a drag that he was gone, and secretly hoped that he'd return one day and take us somewhere that was safe, and where you didn't have to worry about getting yelled at over seemingly small things like not making your bed. And when I say yelled at, I mean long, scary interrogations by someone who could sometimes be funny and nice, and sometimes frightening and violent. Everyone was a little crazy.  And here were all these stories of gods and trolls and heroes and monsters, trying to survive the long cold night, and somehow smiling bravely in the face of impending doom. In the Norse tales, the gods were all fated to die in a great battle called Ragnarok, which was sort of like Armageddon except that all the good guys get killed. They were mortal, and nothing they could do would change their fate- but still they carried on. Which was cool. It was as if they had heard someone sing "carry on, my wayward son, there'll be peace when you are done", and said in reply, "verily". 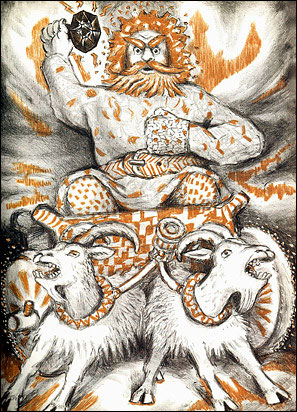 So I read that book over and over.

Then Junior High came along, and puberty, and girls, and life went on. But something about those stories stayed with me- I mean, if you look at my plays, they all have these powerful, lost, cursed people who try to carry on in the face on certain doom. I even put some of the Norse gods in my plays- most notably Hel, daughter of Loki and goddess of death. But others work their way in. I often use Raven, who is the Pacific northwest equivalent to Loki- chaotic, funny, and dangerous.

The other night, I was at Barnes & Noble, and came across a new edition of that book- it's been re-titled "D'Aulaires' Norse Mythology, and has a fantastic intro by Michael Chabon- but it's the same book, with the same wonderful illustrations. It was like running into an old friend I hadn't seen in a long time.  I read a couple of stories, and to my delight found that they still ring true.

And that we are all still a little bit crazy.