SOME DAYS ARE MAGIC 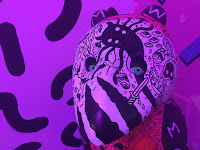 Some days are magic. Plain and simple. You usually don't realize it until after it's over, because you are too busy in Magic Land, learning secret dances and singing ancestral songs of madness and love you didn't know you knew. But later, you think back to the wonderous day that was, and say to yourself: that was a magic day.

At least, that's how it is for me.

I had one of those recently, and I'm going to try to tell you what is was like, if I can. 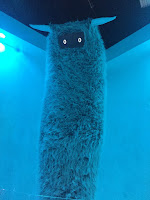 That's the thing about Magic Days. It's hard to convey to people who weren't there what it was like. All you can do is give inklings, sketches, partial memories.  Even so, you feel compelled to tell the world what is was like- because so much of life can be mundane and drab and sad and rough, when a day comes along and reminds you that being alive is a wonder in and of itself, you have to share it, even though you know it's impossible to share it completely. You have to- because that's part of being a human being.

I had read about Meow Wolf somewhere- I don't remember where. Just somewhere. And it sounded really cool. An interactive art installation in a converted bowling alley in Santa Fe, funded in part of whole- again, I don't remember- by George R. R. Martin (the dude who wrote the Game of Thrones books)- and what I read was something like "it's amazing and life affirming and numinous and ethereal". Or maybe that's just how I remember it being described now. Shortly after reading about it, one of my actors in Twelfth Night at Reel Kids told me he went and that it was the most amazing thing he'd ever seen. And this kid was not prone to exaggeration. And shortly after that, Lisa told me we were going to Madrid, New Mexico for my birthday. Madrid is right outside of Santa Fe. Some part of my brain- the smart part- thought "cool, now you can go to that Meow Wolf thing."

And it was insane. In the good way.

How do I describe it? I can't. You go in, and the world implodes, explodes, shines, darkens, morphs, intensifies, and freaks you out. In the good way.

We walked into The House of Eternal Return- which is the name of the installation, Meow Wolf being the art collective that created it- and went on a journey. We went to the bottom of the ocean (or maybe it was the bottom of a fish tank and we were shrunk down); we explored a house where something strange and sad and unbelievable had happened; we walked into a refrigerator and found a path to a secret garden; we were transported to an ice cave where a glowing skeleton of I think a mastodon stood, and played it's ribs like a xylophone; we played Centipede in a throwback arcade that pulsed with color and power; we stood in the dark and touched beams of light that rewarded us with music; We pieced together a story of love and science and magic and wonder.

After hours on the case, we took a break to get some green chile. We asked the powers that be if we could come back and take pictures. "We encourage that", was what they said. So we ate, came back, and took videos and pictures. And then found out there was a concert that night in the space. So we stayed for that, too. I was on the case during the first set, but during the second, this wild tribe band conglomerate known at Partizani Brass Band literally marched through the space, and we followed them to the performance area. And danced and became children.

Then Calliope Musicals came out. 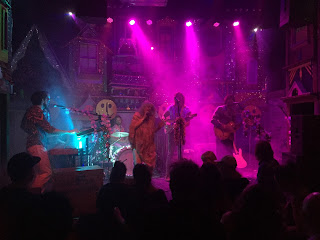 Sometimes, you see a band perform, and right away, you know you are in for something special and new and personal and universal.  They rock, they roll, they sway your soul. The set they played was intense and real and sweet and savage.  Check them out HERE.

So. We entered the House of Eternal Return around 1pm. We left at 11pm. And we were different people. The magic worked, the doors of perception opened, and the journey continued.

Go. Go now. On your way, listen to Calliope Musicals. 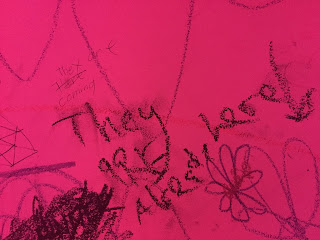 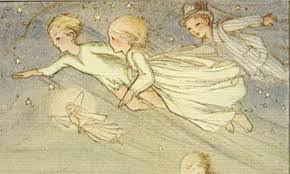