Based on the movie of the same name, 9 to 5 follows three women in the work place as they deal with life, climbing the corporate ladder, and sexism in the workplace- which sadly is as topical today as when the original movie came out in 1980. (anyone who tells you different about how that's all a thing of the past is either a man or out of touch with reality) The script is by Patricia Resnick, who also wrote the film (there is an excellent article/interview with her in the program that I recommend); the music and lyrics are by Dolly Parton- who really is an excellent composer of musical theatre, it turns out. Together, they have created a really tight, fun night of theatre with just the right amount of social commentary to keep you thinking, balanced with sweet songs, exciting numbers, and hilarious comedy. For more info on the show, go HERE.

As usual, the cast and crew assembled by Scott Levy for the FAC is top notch. 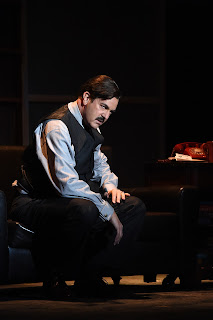 Let's talk about the cast first. To a one, this cast is insanely talented. As Violet, the long suffering brains of the outfit, Miriam Roth is outstanding- strong, funny, full of heart but also a biting wit. Jennifer DeDominici, as the new girl in the office Judy, is sweet, vulnerable, but also strong and determined. Her character probably has the largest arc of the show, and she handles it perfectly. And Crystal Mosser as Doralee is unbelievable fantastic. She has a presence that makes you watch her every second she is on stage. And her voice is off the charts amazing. Mosser basically ropes the entire audience with her talent and energy and then runs the show. She is better than a lot of folks I have seen on Broadway- a true star. All three women shine throughout the show, perhaps best exemplified in the number "I Just Might", and uplifting number about overcoming your fears and taking risks. Backing up the triumvirate of amazing ladies as their foil is Stephen Day as Boss from Hell Franklin Hart. Day is outstanding as the sexist egotistical hypocritical lying bigot. He's the boss you love to hate, and a great comic actor. Not only that, his song Here For You is hilarious. As Roz, the sycophantic secretary who carries a not-so-hidden flame for Hart, Jen Lennon is awesome. As Violet's romantic interest Joe, Zachary Seliquini Guzman (as usual) rocks it, bringing humor and energy to the role and making the audience root for him to get together with Violet. In fact, on of the sweetest scenes in the show is between Violet and Joe that got a few folks in the audience pulling out their hankies. The rest of the cast is amazing. Seriously, they are uniformly outstanding.

Nathan Halvorson directs and choreographs with precision, insight, and a bit of genius. This guy has talent to spare, and uses it well. Every scene moves at a fast clip, every number pops with creativity and flair, and as usual with Mr. Halvorson, every moment of staging furthers the story, enhances the mood, and keeps the audience leaning in.

The band, lead by Jay Hahn, is incredible. But this has become what I expect when I see musicals at the FAC.

The design is also outstanding, capturing the look and feel of 1979, and the corporate world in general, while keeping it fun and a joy to look at. Scenic design is by Erik D. Diaz, who makes very clever use of the stage to take us to all sorts of locations in the blink of the eye. The costume design is by Lex Liang, and they are perfect- conveying character, adding color, and in the fantasy sections adding the perfect tone. And lighting the whole thing is light designer Holly Anne Rawls, who gives the show a colorful, perfect look, adding mood while keeping everyone looking fabulous.


Suffice to say, I really loved this show, and encourage you to get your ass to the FAC ASAP. 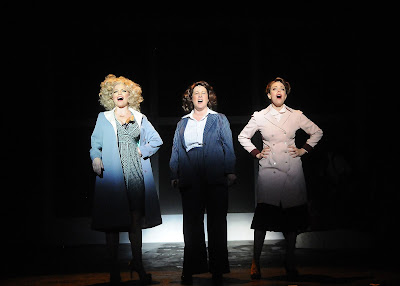