I love the Scottish play. That's what a lot of theatre folk call Shakespeare's MacBeth. In fact, I rarely say the actual word, "MacBeth". You see, it's considered bad luck. Especially in a theatre. There are varying reasons given. Some say Shakespeare actually used real spells for the witches lines. Some say it is a cursed show because it deals with some historically nasty people who really did a lot of bad things. Some say it's just a bunch of old wives tales. 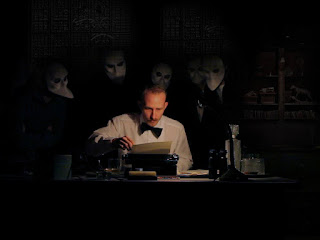 And ever since I first heard of the Scottish play, and all of its tradition and mystery, I've been fascinated. Enchanted, you might say. I've read it, seen it, been in it. And I love it. I 've written a screenplay about theatre superstitions called Ghostlight, am working on another screenplay that takes the basic story of MacB- which for those who aren't familiar is a tale of betrayal and ruthlessness in pursuit of power and how said pursuit empties the soul of all joy and hope- and sets it in the world of high school football ala Friday Night Lights. Most recently, I directed a production of the Scottish play for Colorado's Finest High School of Choice, an alternative high school for young people who have had trouble in so-called normal school. It was amazing how easily high school students were able to relate to characters who sell there souls to climb the social ladder.

Suffice to say, this is a play that is part of my being, an essential book in my mental library.

So it was with great joy that, a few weeks ago, I found myself in New York City at the McKittrick Hotel, wandering around like a ghost, silent and masked, as a mobbed up version of MacBeth unfolded all around me in the form of Sleep No More. The show is like a mix between a haunted house and modern dance and dream and theatre and I don't know what else. You enter, are given instructions on how to behave in a very cool bar where performers interact with you, cajole you to have absinthe, and call you one by one to go through the door that leads you into a world of magic, betrayal, sex, and madness.

I like awesome in my theatre. Awesome and different and cool and original and dangerous. 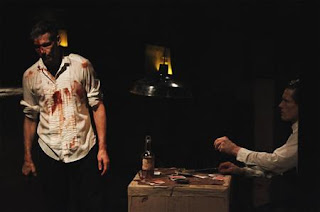 Every person in the audience becomes part of the show as they wander through the madhouse, as each is given a mask to wear and instructed to remain silent. The effect is that, as you make your own personal journey, you see all your fellow audience members looking like fellow ghosts, lost souls condemned to take part in the ghostly events.

And when I say take part, I mean it.

One of the first things that happened to me was this lady, pregnant and clearly upset and also one of the people of the story- I knew this because she wasn't wearing a mask- grabbed me, dragged me into a closet, rubbed salt behind my ears while whispering something about how she has always tried to protect me from evil. Before she could say more, off she ran. I followed her, then came across a trio of lunatics dancing through a dimly lit hallway. As I went from scene to scene, which are all happening all over the three floors of the hotel at the same time, I could see other fellow ghosts running around following other actors. At one point, I ran into my wife, a fellow ghost that evening having her own adventure, and together we played a creepy card game with a murderous bar tender.

All I can say, with any amount of certainty, is that it was one of the most amazing nights of theatre I have ever experienced.