THIS TOO KICKS ASS 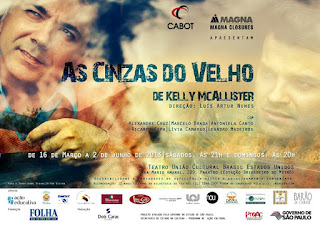 Burning the Old Man is by far my most successful play to date. It's initial run was well reviewed, won the NYIT award for outstanding full length script, been published both in print and online (at the best site for new scripts, Indie Theater Now) is featured in several scene/monologue books as well as in the latest edition of the text book Acting is Believing (a book I had to read in college), and has been translated into Czech and Portuguese. It ran for three years at Divadlo na Zabradli in Prague, and is currently playing at  Divadlo Exil. This Saturday, it opens in Sao Paolo, Brazil with the title As Cinzas do Velho. And this July, it will open in Salinas, CA as part of the 2X4 BASH at The Western Stage.

I look at the above paragraph and think that looks like a bunch of bragging. And maybe it is. But I feel pretty good about everything that's happened with the play, so what the hell? As Max Bialystock would say, flaunt it when you got it, baby! Flaunt it!

I wrote the play very quickly. The first draft took less than a week, and just sort of poured out in a torrent from my mind to my computer screen. I think it's both strange and wonderful that something that  seemed to come so easily has had such a long, healthy life. No doubt there is a lesson in there about trusting your instincts, getting out of your head, and letting the universe, or multiverse, guide you.

I think I am on the same track with my latest play, now titled Mathurine. I wrote the first draft in less than a week, have not over thought anything about it, and it seems to be touching a chord with everyone who reads it.

Now that I think of it, most of my best work is the work that I don't over think. I wrote my one act Hela and Troy in a day, and that's my other international play, having had productions in NYC, Canada, and Dubai.

But maybe those plays were only easy because I had spent plenty of time on plays that were not so easy. Or because I've spent my entire adult life around the theatre, as an actor, reviewer, director, and audience member. I don't know why. But I do know that, for me, the best thing to do when I sit down to write is to put on some good music, find the dimensional door that opens into another world, and walk through it. When I say dimensional door, what I mean is this: when I write a play or story or whatever, I usually see in my mind some scene- a guy running into a hotel lobby with a box full of his father's ashes; Hela, the Norse goddess of death, speed dating; a guy and a girl breaking into an apartment in Manhattan intending to do violence to a pinball machine. Then I go to that world, and that's that. It's hard to describe any better than that.

I must say here that I owe a lot to JoAnna Beckson- one of the best acting teachers around, who I was lucky enough to study with when I lived in NYC. She taught me to check my head at the door and be in the moment; to listen to my instincts; to listen and respond to what is happening right in front of me and to stop imposing my idea of what should be happening on top of what actually is happening. I've been very fortunate in my life when it comes to teachers, mentors, and colleagues. JoAnna inspired me, challenged me, and gave me wings.

One more thing. In Burning the Old Man, there is mention of the phrase "this too shall pass." There is a song by OK Go called This Too Shall Pass, and always makes me smile. There are two videos for that song. Both of them are clearly the product of people who let their imagination soar.
at March 11, 2013